Our daughter Sharlee, and her husband Paul, have flown down from Grafton to join us in our tour of the Great Ocean Road region of Victoria. Lyn and I had been before we purchased our Freetime motorhome and  have done a few walks along the interesting coastline of the area. So what better way to visit it again than with family?

We chose to stay away from the known touristy areas and take the car with us to use for transport to and from those very busy spots at this time of the year. Our first town was Colac. It’s kind of difficult to book a spot so close to New Year but we managed to be placed overlooking the nearby Lake Colac. Management allocated us a pull-through site, with an ensuite, which worked out well for Paul and Sharlee; the ensuite became their wardrobe as well. 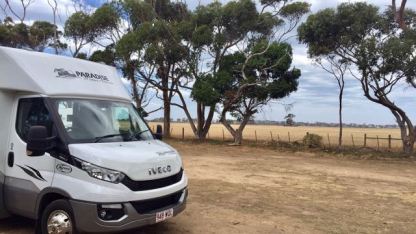 A regular stop on the Geelong Highway

Lorne, for breakfast at the sea-side cafe, became our first destination for Day 1 followed by a drive to Apollo Bay and a 10km walk along the coast from Marengo. The weather was a little too overcast for much of the day but some sun poked through for short periods. Paul is an enthusiastic photographer and had recently purchased an iPhone 7 to accompany his Canon (we are not Canon people). So he was enjoying giving this little phone ‘thingo’ more than just a test. Throughout the week, he became very proficient in taking panorama selfie shots of the 4 of us with an ‘ace’ background. At an early stage of our week, he had shot 2,500 photos; goodness knows when he’s going to weed and edit all of those, and then find time to make his photo book. But there will be some very good photos in the book, that’s for sure. 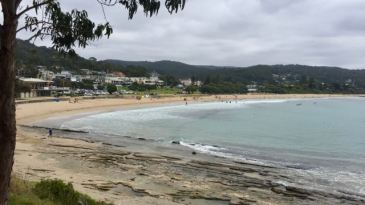 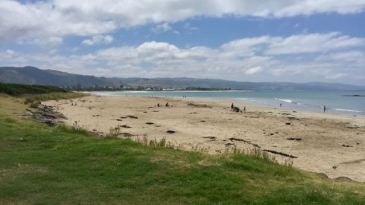 We carried flies for free. 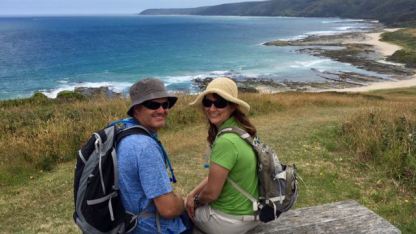 Cooked in the convection oven in the motor home.

The views you come across when walking the Great Ocean Walk, are to be experienced best when the sun is shinning brightly in the morning for the eastern part, and then in the afternoon for the western section around the Port Campbell National Park. Each turn along the track presents a new and exciting vista. And, there are ice-cream shops in most of the towns nearby; a bonus. The one in Apollo Bay is very popular.

Hidden away in the Otway Ranges is a well constructed tree walk. The walk is quite extensive in the high tree tops with a bit of a climb up a tower for an all over view. There is a zip-line run as well that you can enjoy, at a price. 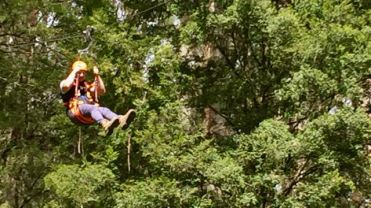 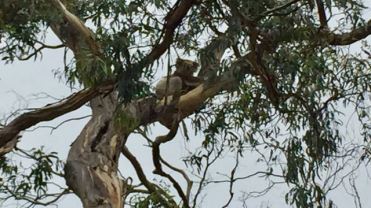 Found this old fella along the way.

After the tree-walk, we drove down to the lighthouse at Otway Point. We had visited the Rainbow Falls before which are nearby. Paul and Sharlee wanted a longish walk for at least one of their days away. The trail is mainly sandy and is around 5.5km in each direction. Once on the beach, there is another kilometre to the falls. These falls are formed from spring water seeping through the cliff face. Over years, the cliffs have become a golden colour with areas of green and red. With a blue sky and the sun shinning on the cliff, the falls stand out along the coastline. 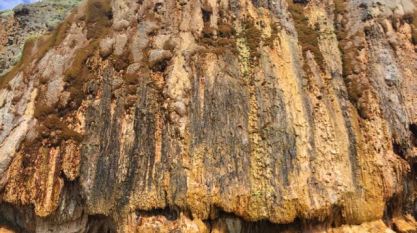 The next day, we packed up the tent and motorhome and headed towards Warrnambool. Our booking was from 2:00pm, but seeing the sun was shinning and the air was clear, we parked the motorhome at the intersection towards Port Campbell and took the car to the magnificent coastline in the Port Campbell National Park. The coast line is made up of cliffs and islands with ‘flat’ tops. Various sections are named due to their land formations such as London Bridge or The Grotto, or the well known Apostles originally made up of 12 but now a lot less. They have eroded over the years and fallen into the ocean. So you can’t call them “The 12 Apostles” anymore; “the Apostles” is fine. With the blue sky as a background, we were able to obtain some good photos as we moved along the coastline. We missed seeing the Loch Ard section; but another day will eventuate. 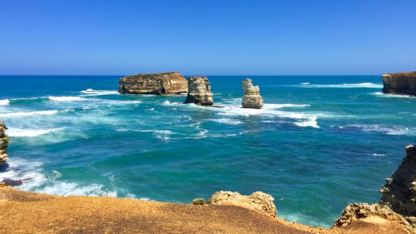 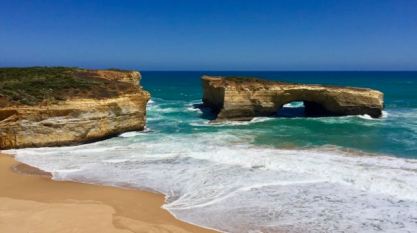 A visitor popped in 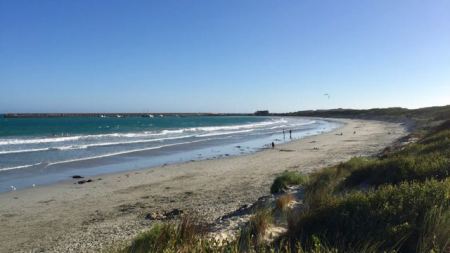 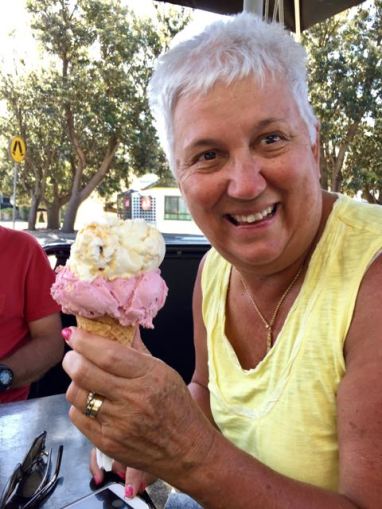 On the way back to Warrnambool, we stopped of at the ice-cream shop in Port Campbell. They have a great supplier from the local town of Timboon. If you ever get through there, check the store out for delicious, “end-of-the-day” ice-creams.

We had never been to Warrnambool but found the campsite quite easily. It was right on the beach almost, with a bike/walk trail and a line of scrubs between our site and the sand. The walk along towards the breakwater is easy and deserved a visit. A guy was perched there to take some evening photos. He had a 600mm lense on his camera attached to a large tripod. We got chatting and he had been a well known wedding photographer in the Warrnambool district and had joined up with another photographer in business. The business went bust and he had lost everything, so to say. He sounded destitute. Recently, he had submitted to channel 9, a photograph of a surfer coming down a wave with the spray ascending up behind him. Beyond the surfer, is the tail of a migrating whale. What a picture to own! He had been paid good money for the use of the photo, but still he felt he needed some new emphasis to his life. His expertise is really in people photos so we suggested he join a cruise team of photographers, which he is now pursuing. Our chatting ended around 11:00pm.

The rain turned up the next day so we visited the Maritime Museum for the morning and a cafe lunch of soup and home made scones; it was cold and wet, so the soup went down well. The museum is well worth a visit as there were many shipwrecks near Warrnambool during the time of the setting up of the British Colony of Melbourne in the 1800’s. Many artifacts and valuable treasures are on display in the museum such as a diamond ring found attached to one of the female survivor’s inner garment, in a cave from a shipwreck. There is also an expensive sculptured peacock, some $4.5 million worth.

Main Street of the Museum 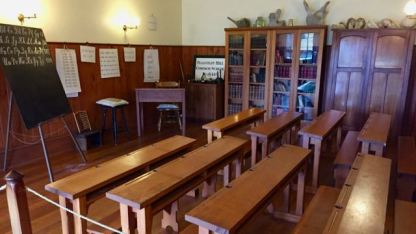 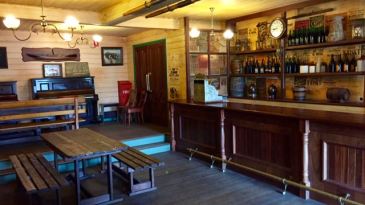 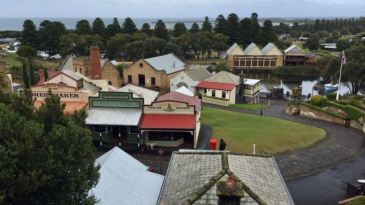 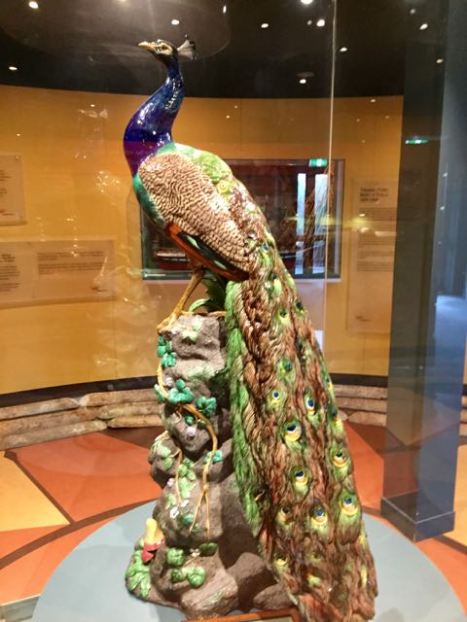 This peacock is insured for $4.5m

Sunday, we travelled to Port Fairy just 20 or so kilometres away to the west. This town is well known for the Port Fairy Jazz Festival and the Port Fairy Folk Festival. It is also a fishing village where trawlers bring back their overnight catches of abalone and crayfish. The walk around the small island close by known as Griffiths Island, is the breeding grounds for the migrating mutton bird. We wandered the main street of upmarket gift and fashion shops with of course, an ice-creamery at the end of the street (amazingly not as good as Port Campbell). 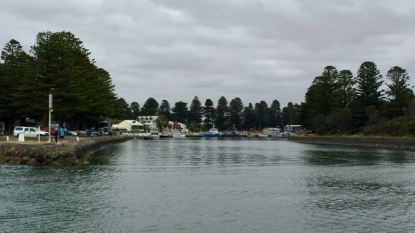 We returned to Warrnambool in the early afternoon and unhitched the bicycles for a ride along the waterfront trail towards the whale viewing platforms. Normally, when the whales are migrating, this area would be very busy with tourists. But the ride has done us good after being a little too tourist-type visitors. 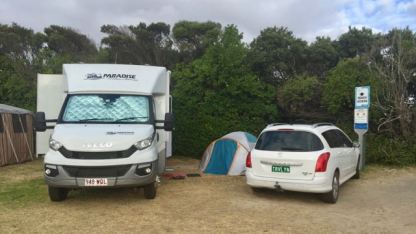 In the evening, I thought I would send a message to some friends we had made while on our South American trip in 2015. They live in Toowoomba. Would you believe they were in the RSL at Warrnambool, just visiting. What a coincidence! So we met up for the evening to reminisce on the past few months since we had travelled the Mekong River together in September.

We had decided to stay in the region an extra day and moved to Port Campbell Campground, much closer to the Loch Ard land formations which we had passed by a few days ago. The weather was brilliant for photography. We stayed there for 3 or 4 hours, finding different viewing platforms to view and photograph the various land formations. Paul managed to shoot another 1,000 photographs and numerous panoramas on his iPhone. The ice-cream shop took our interest again and deserved  another visit before we returned to the Apostles region. Our plan was to climb down the Gibson Stairs for some sea-level views at sunset.

From ‘sand-level’, the pillars of rock tower above. However, the sunset didn’t give the impression that it was going to present good a picture. So we moved over to the touristy area.  We didn’t have to wait long for a magnificent sunset to begin painting the western sky. It is amazing that there are no National Park Rangers on duty as so many overseas tourists jumped over the safety fence to get a better picture. Imagine the picture if someone had slipped on the ‘ball bearing like gravel’ on the narrow ledges they were tip-toeing on and fell to their death.

When Sharlee and Paul visited again for the next day’s sunrise, a local photographer, who had been returning to the Apostles for 30 years, told them that he had never seen a sunset like it. That made us feel special. Paul was very happy to have returned for a sunset visit to this Victorian icon. 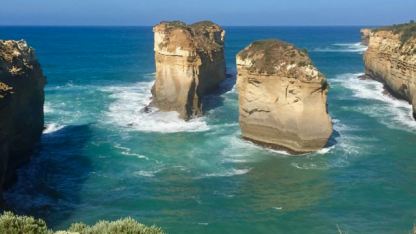 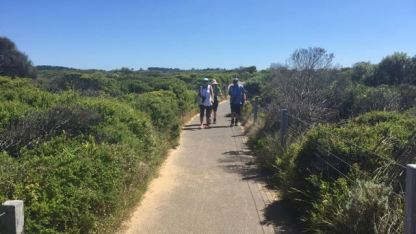 No photoshopped. Just smart way of using the panorama setting on the iPhone camera.

I had to include this – the handbrake held well. 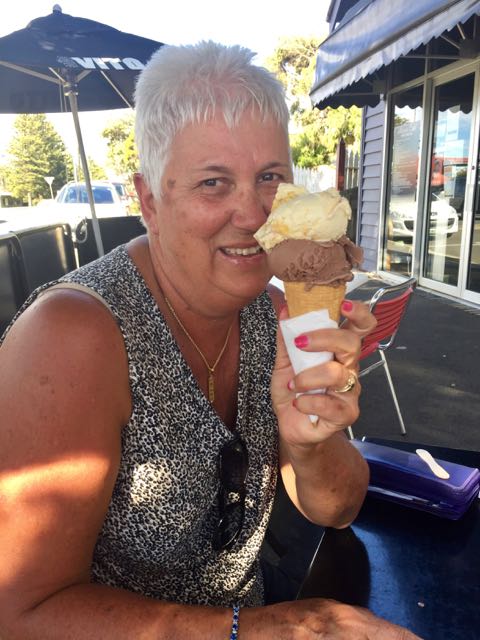 Gibson’s Stairs to the sand view of the Apostles. 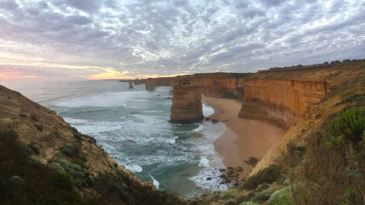 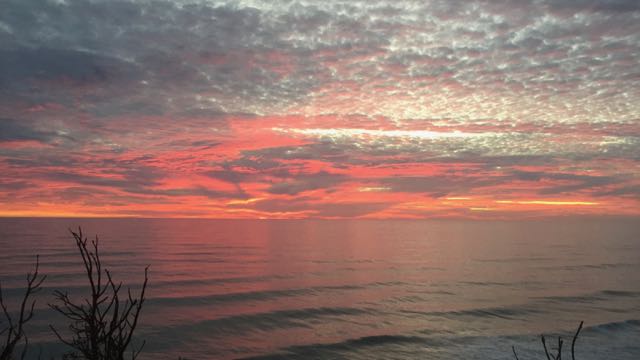 The Tuesday became our ‘return home’ day, so clean the inside of the motor home and get the laundry ready for the arrival back home. Paul and Sharlee wanted to visit the Apostles for what turned out to be a ‘dull’ sunrise and then complete the full length of the Great Ocean Road while we made our way in the motor home to Torquay where we found a lunch spot overlooking the ocean. Our son Jay and family live in Geelong and we managed to have pizza for dinner before returning to Jeanette Street; refreshed and with cameras full of photos. (When shall I find time to do the editing and movie making?)

Here’s a suggestion for anyone who visits the Great Ocean Road. Pick the days you visit by taking out at least 7 days and then choose according to the weather forecast.

As a kiwi writing this on Australia Day, and knowing that New Zealand has some terrific land forms to view, I have to concede that Australia’s Great Ocean Road region is superb and well worth the visit. And guess what, we’re having ice-cream for dessert tonight.

Join 25 other subscribers
Follow great life – got nothing on on WordPress.com